In this article I explain how to set up JACK and Ardour for latency free overdubbing.

Where is latency introduced?

At time t, we are at the beginning of bar 2. It starts with a metronome click. At time t, Ardour sends the first sample of the metronome click to the speakers. It passes various stages in the computer and a DA converter in our audio interface. It will take an amout of time before we actually hear the sound. We call that time output delay (OD). When we hear the sound we react to it and play a chord on our instrument. It will take an amount of time for our microphone to capture the sound, convert it to a digital signal, and send it to Ardour. We call that time input delay (ID).

The time between Ardour sending the signal to the speakers and it receiving a recorded signal back is thus OD+ID.

In order for the two tracks to line up perfectly, Ardour has to compensate for this latency. It can do that, but we need to know the input and output latency of our system.

In order to measure the I/O latency, we need to create a loop. That way a test program can send a signal and measure the time it takes for the signal to travel through the system.

I use a Zoom H4n as a USB audio interface. The first way to close the loop is with a direct patch cable: 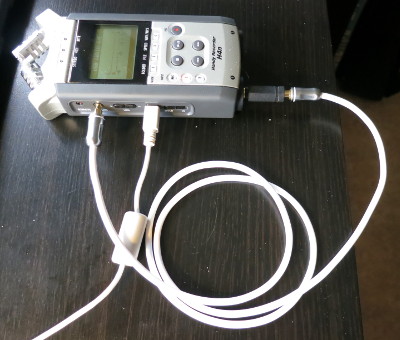 We connect the patch cable from the headphone line out to a line in. The H4n has combo inputs that works for microphones, electric instrument, or line level sources.

The second way to close the loop is with a speaker and a microphone: 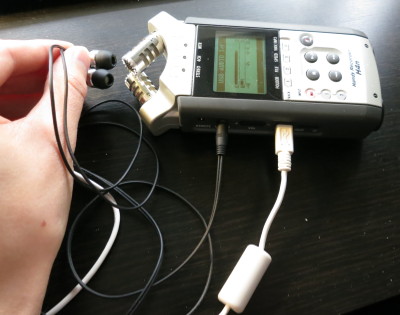 We connect headphones to the headphone line out and put them close to the built in microphones on the H4n.

Now that we have the loop set up in hardware, this is the process to measure the I/O latency:

The Zoom H4n supports 44.1kHz and 48kHz. I ended up with the following measurements:

When measuring using 44.1kHz, the suggested value for latency I/O kept increasing. I asked about this on IRC:

This parameter doesn’t seem to have any effect on the roundtrip latency.

This is a bit surprising to me, because when using a mic, the sound has to travel that extra distance through the air. But the delay was not significantly smaller, and during the measurements, the delay number kept going up and down (although stabalizing around some value).